Who doesn’t love a black forest cake now and then? It’s one of my FAVOURITES. This will be one of my last dessert dishes for a while I think and why not end it with a delicious and creamy treat!

Now you’re probably thinking, “are cherries keto?”.. Well, thats debatable and a reason why I chose to name this video Low Carb instead of keto friendly.

Here’s the deal – 100g of cherries contain only 12 carbs. Not that bad right? Especially when you see how many cherries equal 100g.. It’s actually pretty good.

I did a little research beforehand and the well established Diet Doctor says a handful of cherries now and then will NOT kick you out of ketosis. (It’s even in his top 10 of low carb fruits! SOURCE: here & here)

SO, its up to you whether you want to consume cherries if you are keto. One slice won’t have that many cherries.

What you will need:

In a mixing bowl, whisk the cake ingredients together in the order they appear on the list above.

Separate the batter in two and pour each half into two separate lined or greased 6-inch cake pans. Bake at 350 for approximately 20-25 minutes.

While your cakes are baking, using a stand or hand mixer, beat your heavy cream, sugar substitute and vanilla until the cream forms stiff peaks.

Slowly fold in your mascarpone cheese until it’s mixed thoroughly. Put the icing in the fridge until your cakes are done and have cooled down.

Once they are cool, pipe a layer of frosting onto the top of one of the cakes. Drop a few cherries into the icing (save some for later) before gently placing the second layer on top.

Top with the rest of your icing, sugar free chocolate sauce and cherries!

The Hungry Elephant is a participant in the Amazon Services LLC Associates Program, an affiliate advertising program designed to provide a means for us to earn fees by linking to Amazon.com and affiliated sites. 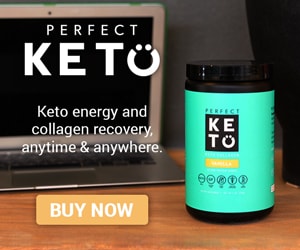