Chocoflan – dubbed the Mexican ‘impossible’ cake or the ‘magic’ cake, this delicious dessert is a nice two-layer bundt cake. The bottom is a decadent chocolate and the top is a vanilla flan. The best and most magical part of this dessert, is that it is cooked upside down, but the layers FLIP during the baking process. You start by pouring in the cake batter, followed by the flan mix, but when you pull the cake out of the oven, the cake batter will be on top!

I was a little afraid to make this cake to be honest, because I wasn’t sure if the almond flour would be too heavy and the cake wouldn’t turn out. However it worked out almost PERFECTLY. I used a half a cup of whey chocolate protein powder so that it’d be a little more fluffy than with just almond flour. I wish the outter appearance of the cake was a litter neater, but the taste was SPOT on.

My first cookbook – Keto Cravings – is on Amazon now! 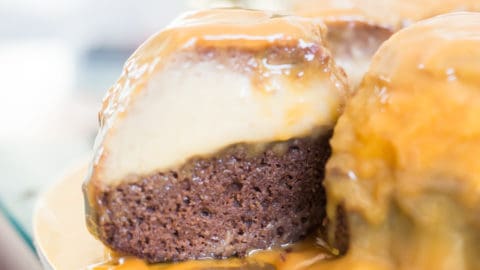 The flan in chocoflan is traditionally made with condensed milk. You could use my condensed cream recipe, but it would have added a TON more calories, so instead I used two cups of heavy cream instead. The original recipe also uses cajeta – a Mexican caramel made with goats milk. Since I can’t get that here in Ireland, I ordered a delicious sugar free caramel syrup online.

If you like this recipe, try out our dark chocolate cake with peanut butter icing, Kentucky butter cake, Mississippi mud pie or Japanese cheesecake!

The most magical cake around! You start with pouring in the chocolate cake batter, followed by flan mixture and it magically swaps sides during the baking process. This keto chocoflan has been HIGHLY requested!