A staple of the holiday season. Who doesn’t love having a nice apple crumble after Thanksgiving/Christmas dinner? Now you can have your delicious dessert with this amazing keto apple crisp.

Now before you go all crazy on me, there are NO apples in this recipe. Instead I used zucchini and apple cider vinegar to replicate a delicious, tart apple.. and it worked! 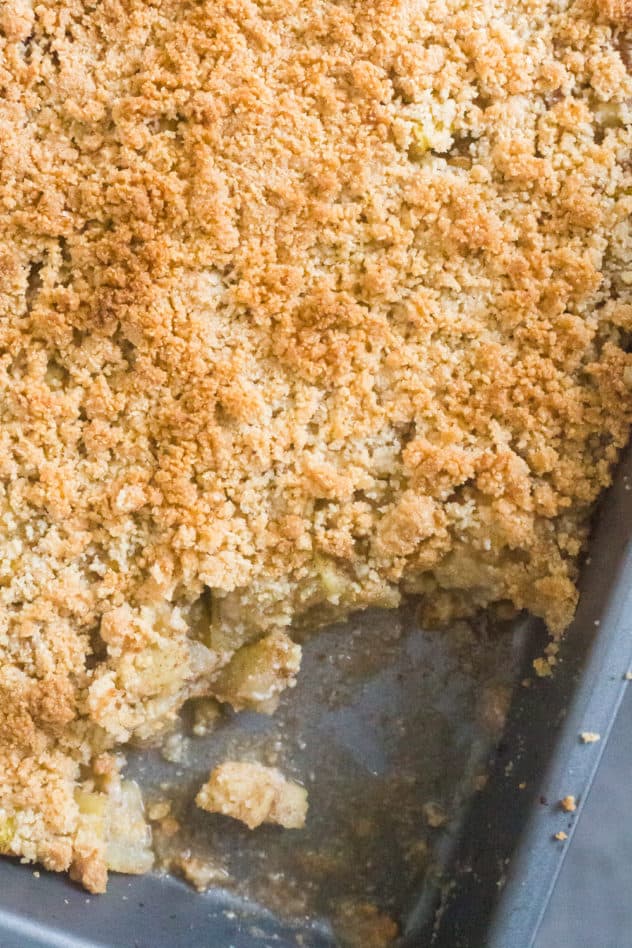 So in the U.S. and Canada, the difference between a crumble & crisp come in the top – a crisp usually is topped with oats – a crumble is usually flour. However outside of North America, crisp and crumble are used interchangeably.

Since oats are fairly high in carbs, this recipe will be interchangeable between crisp and crumble.

I gotta admit though – I’m not one to like warm apple desserts, but this keto apple crumble is perfect to keep you nice and toasty in the winter months – and it actually tastes like apple!

That’s pretty much it for this recipe. Super easy. Very delicious. Makes a TON of servings.

If you like this recipe, make sure to check out my keto pecan cobbler!

A yummy keto apple crisp to keep you warm in the winter months. Sugar, grain and gluten free! Only 4.4 net carbs per serving!

This makes around 8-10 servings.

I followed the recipe almost exactly, except halved the nutmeg and allspice to 1/2 tsp because I find them to be overpowering. The topping is great, but maybe needed double or even triple the butter to form a crust. It ended up being sort of powdery, with a bit of crust in some spots. The zucchini filling had VERY little sweetness to it, so I would double its sweetener as a minimum. I used Lakanto classic granular and Swerve brown sweeteners. Even only with half the nutmeg and allspice, I felt that their flavors were extremely strong, so I might just use 1/4 tsp next time, or just a pinch, or even leave them out entirely. I was so hesitant about the ACV, thinking it would be sour, but it didn’t cause a vinegar flavor at all. My husband and I were both surprised at how much apple flavor there was with no extract or apples used. I would probably go another 10-15 minutes at least, as I felt the zucchini was still a little crunchy for my taste, or maybe cook on the stovetop for a few minutes before pouring into the casserole dish. I did end up sprinkling more monkfruit on it on my plate and mixing it in and that was pretty good, but not enough to cut the allspice and nutmeg. I did not have any soupiness at all, as is sometimes the case with zucchini. Overall a good base, and with some tweaks, it could be really delicious for my tastes.