You can’t even tell there’s no fruit! These keto apple fritters taste just like your average donut shop fritter but without all the carbs. So easy to make! 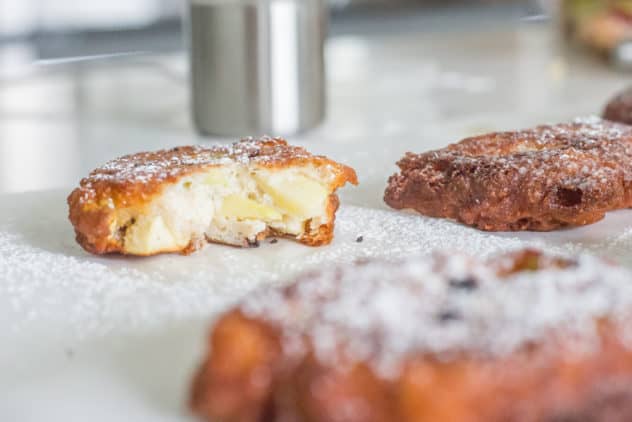 Instead of the usual granny smith apple – I made these gluten free apple fritters using zucchini and replicated the tart apple taste using apple cider vinegar. I know that may throw people off but it really gives it that apple taste!

Alternatively, you could use chayote squash as some people prefer using that instead of zucchini. Either way – both will taste delicious.

*I know one thing people will ask when they view my video is “what are those black balls?”.. I used a churro flavoured whey isolate and it had ‘pearls’ of flavour in it. 🙂

Of course when deep frying – make sure to take all precautions and don’t leave your food unattended. I say this as my neighbour once put his chips on too high and walked away and started a massive fire in his unit. Don’t be like that. Be safe and use an oil with a high smoke point.

I deep fried my low carb fritters on low – any higher than that and they burned easily and the inside was uncooked. You want to be able to cook them for around 7-10 minutes so that the inside is nice and fluffy!

If you like these – make sure to check out my keto churros or my keto funnel cake!

Gluten, grain and sugar free - these keto apple fritters taste like your average doughnut shop! Made with zucchini, I can't even tell the difference!

Once your zucchini has been peeled and chopped - dry them off as best as you can with a paper towel.

In a mixing bowl, combine the zucchini, 1/4 cup of sugar substitute, cinnamon and apple cider vinegar. Make sure all the zucchini has been coated in the vinegar mix. Set aside.

In a separate mixing bowl, whisk together the eggs, cream and vanilla.

Add the zucchini and vinegar mixture to the batter. Stir until incorporated.

Heat up the oil or lard on low heat.

Place a small scoop (around 2 tbsp worth) of the batter into the oil and fry for 7-10 minutes. Flip when the donut has become a nice dark golden brown.

Let cool then top with some powdered sugar substitute.

When you say large zucchini could you give me the amount of zucchini in weight or cups
Thank you for all of your great recipes. ?

Would you share exactly what whey protein isolate you used, since it’s a flavored one. I would like to know the actual brand. Thanks so much!

I use isopure brand!

But for this one I used Revolution brand! From Walmart

I just had to say thank you for these. I’ve been having a bad craving for apple fritters all week and these were exactly what I needed. It really is amazing how well the zucchini can stand in for apples like this. I didn’t have a flavored protein powder – I have the Isopure 0 carb – so I used 1 tb of the jordans skinny cinnamon syrup along with some extra cinnamon and this turned out fantastic. Thanks so much again…now I’m hoping to “forget” they’re in the fridge!

When you say to fry these fritters on low heat, could you tell me about what temperature you mean by that? I want them to be properly cooked, but worry that if I don’t get the temperature right, that they will be oily. Thanks!

do you think we can put these in the air fryer

Im not sure to be honest, I havent tried but i may just give it a go and see

They were very greasy! My mouth and throat and intestines are thoroughly coated in oil. I ended up baking them for 15 minutes in the overnight after frying them and putting a cinnamon glaze. I haven’t made much deep fried stuff so it was very challenging.

Found and love your site. So excited to try this recipe but it didn’t hold up while frying! I don’t know what I did wrong but will try again. I love apple fritters and they tasted great, just dissolved in the oil.