Ok, I finally jumped on the keto cinnamon roll bandwagon!

I TRIED to do it without using fathead, but in the end, they truly just didnt taste as great. I honestly think fathead cinnamon buns (at least these ones) rival Cinnabon! 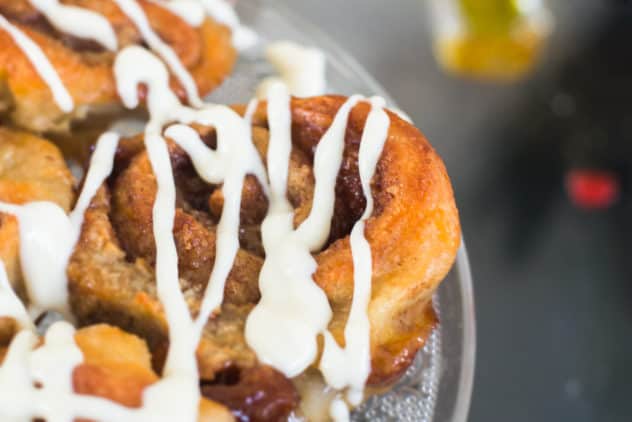 Trust me when I say – you do NOT taste the cheese in the dough. I realize that it seems like a lot of mozzarella but honestly, it gives the dough a moist texture without adding to the flavour!

These are great to make on a Sunday for the week – just reheat and go! Super easy.

Thank you very much for your yummy recipes. Very much appreciate all the work you do for us all. God Bless.

Any idea what I may have done wrong?

It may not have been mixed well enough or maybe the egg was too big? what size did you use? I found when using a large egg, the dough gets like that. you could try to oil the parchment paper with some olive oil before rolling.

Can you tell me how you arrived at the Total Carbs per serving? Curious, because the Brown sugar substitute has 8 carbs per 2 tsp. There are 12 tsp in 1/4 cup = 48 carbs in just that one ingredient. Divide that by the 6 cinnamon rolls and it’s 8 cabs per roll just for the Sukrin Gold.

Hey Vic! So Sukrin Gold is made from erythritol which is a sugar alcohol (also known as polyols). Most sugar alcohols, erythritol specifically, aren’t absorbed by the body and are flushed out rather quickly. So I never usually include erythritol when I count macros. Other sites, such as Ruled.Me, do the same.

General rule of thumb, if a product has sugar alcohols (or polyols), you can subtract that number from the total carbs.

These had good flavor, but the texture came out horrible. My dough stuck to the parchment like the above lady. I don’t think I can recommend these and won’t make them again. I used monkfruit if that might have made a difference.

sorry to hear! I’ll have to remake them and see if I did something wrong.